The growing list of applications and use cases of blockchain 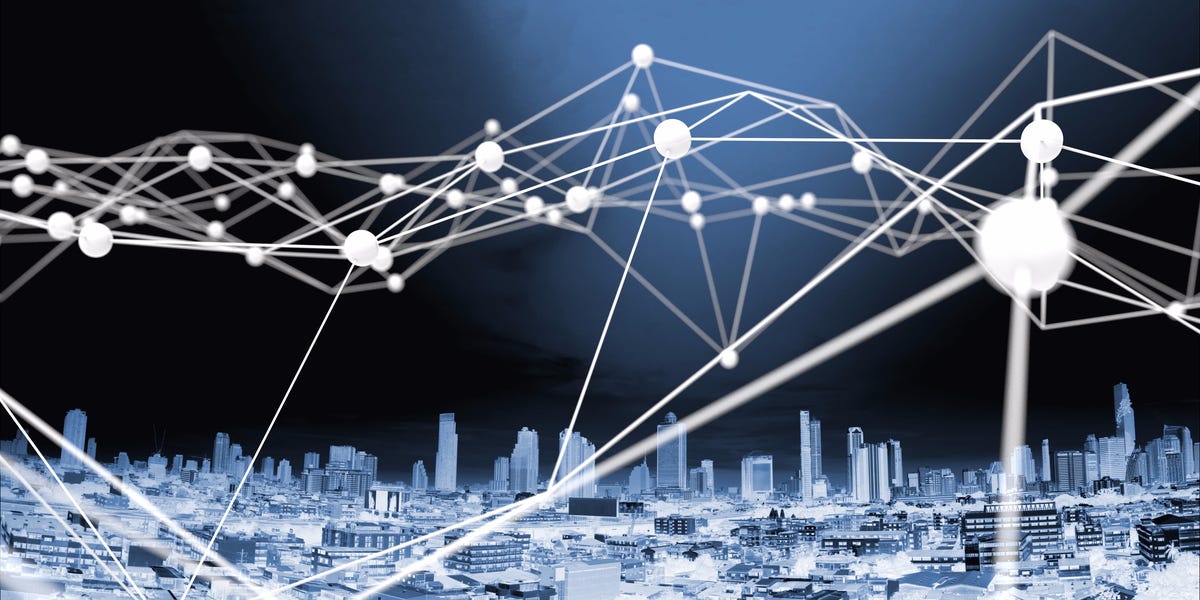 As Bitcoin and other cryptocurrencies have been picking up steam, focus has turned to blockchain – the underlying distributed ledger technology (DLT) that powers these digital currencies. 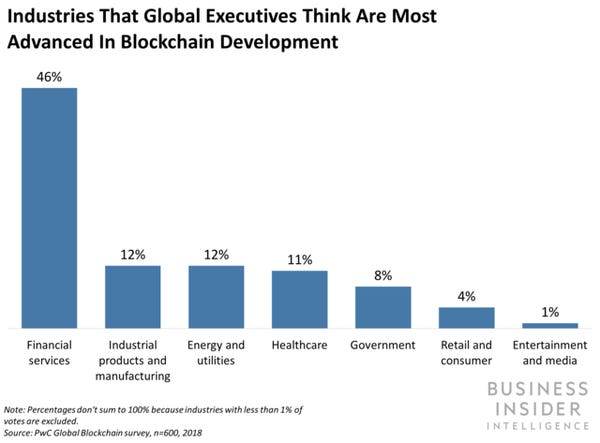 Blockchain is making its way into seemingly every industry. Business Insider Intelligence

Blockchain technology is simple to understand at its roots. Basically, the tech exists as a shared database filled with entries that must be confirmed by peer-to-peer networks and encrypted.

It’s helpful to envision it as a strongly encrypted and verified shared Google Document, in which each entry in the sheet depends on a logical relationship to all its predecessors, and is agreed upon by everyone in the network.

But blockchain technology has many more potential use cases beyond other than just serving as the fuel behind Bitcoin. Below, we’ve outlined some of its emerging t applications across finance, business, government, and other industries.

Blockchain Use Cases in Banking & Finance

Blockchain provides a way to securely and efficiently create a tamper-proof log of sensitive activity. This makes it excellent for international payments and money transfers. 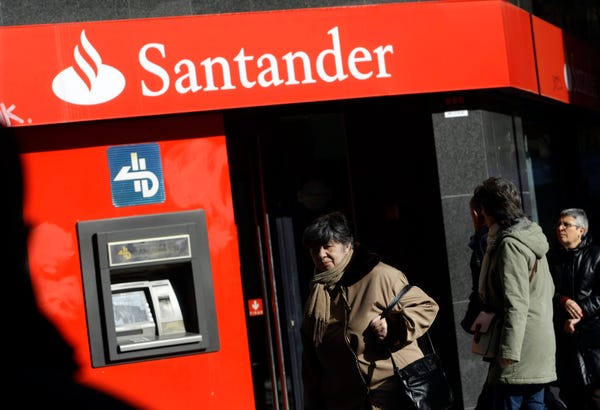 By automating the entire process on the blockchain, Santander has reduced the number of intermediaries typically required in these transactions, making the process more efficient.

As a large commercial bank, Santander has numerous retail clients who would benefit from more efficient and cheaper payments, particularly in the area of international transfers. Blockchain technology can be used to decrease the cost of these transfers by reducing the need for banks to manually settle transactions.

Blockchain-based systems also have the potential to improve capital markets. A McKinsey report identifies benefits that blockchain solutions offer capital markets, some of which include:

Startup Axoni was founded in 2013 and builds blockchain-based solutions specifically for capital market improvement. Most recently, Axoni announced the launch of a distributed ledger network to manage equity swap transactions – enabling both sides of an equity swap to be synchronized throughout their lifecycle, communicating changes to each other in real time.

Historic methods of trade financing have been a major pain point for businesses because the slow processes often interrupt business and make liquidity hard to manage. Cross-border trade involves a large number of variables when communicating information – such as country of origin and product details – and transactions generate high volumes of documentation.

Blockchain has the ability to streamline trade finance deals and simplify the process across borders. It enables enterprises to more easily transact with each other beyond regional or geographic boundaries. 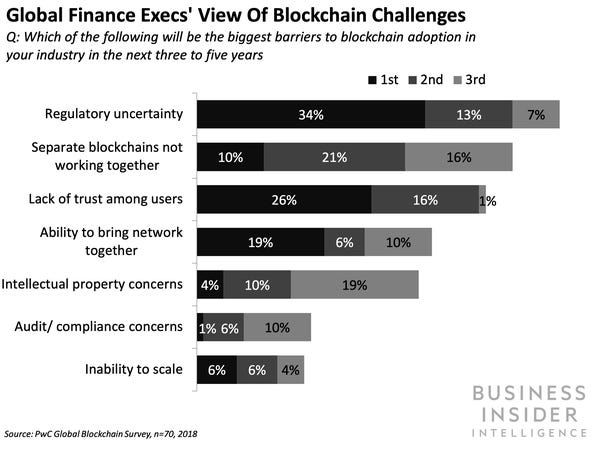 Blockchain decreases the possibility of human error and ensures the integrity of the records. Business Insider Intelligence

The extremely secure nature of blockchain makes it rather useful for accounting and auditing because it significantly decreases the possibility of human error and ensures the integrity of the records. On top of this, no one can alter the account records once they are locked in using blockchain tech, not even the record owners. The trade off here is that blockchain tech could ultimately eliminate the need for auditors and erase jobs.

Once again, the encryption that is so integral to blockchain makes it exceedingly helpful in combating money laundering. The underlying technology empowers record keeping, which supports “Know Your Customer (KYC),” the process through which a business identifies and verifies the identities of its clients.

Arguably the greatest blockchain application for insurance is through smart contracts. These contracts allow customers and insurers to manage claims in a transparent and secure manner. All contracts and claims can be recorded on the blockchain and validated by the network, which would eliminate invalid claims, since the blockchain would reject multiple claims on the same accident.

For example, openIDL, a network built on the IBM Blockchain Platform with the American Association of Insurance Services, is automating insurance regulatory reporting and streamlining compliance requirements. 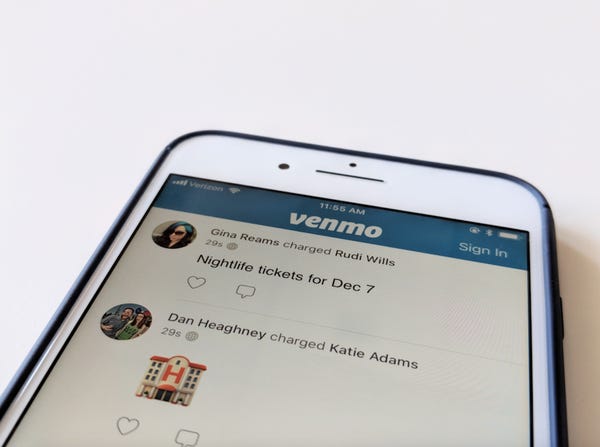 P2P payment services such as Venmo are convenient, but they have limits. Some services restrict transactions based on geography. Others charge a fee for their use. And many are vulnerable to hackers, which is not appealing for customers who are putting their personal financial information out there. Blockchain technology, with all its aforementioned benefits, could fix these roadblocks.

Blockchain’s immutable ledger makes it well suited to tasks such as real-time tracking of goods as they move and change hands throughout the supply chain. Using a blockchain opens up several options for companies transporting these goods. Entries on a blockchain can be used to queue up events with a supply chain — allocating goods newly arrived at a port to different shipping containers, for example. Blockchain provides a new and dynamic means of organizing tracking data and putting it to use.

Health data that’s suitable for blockchain includes general information like age, gender, and potentially basic medical history data like immunization history or vital signs. On its own, none of this information would be able to specifically identify any particular patient, which is what allows it to be stored on a shared blockchain that could be accessed by numerous individuals without undue privacy concerns. 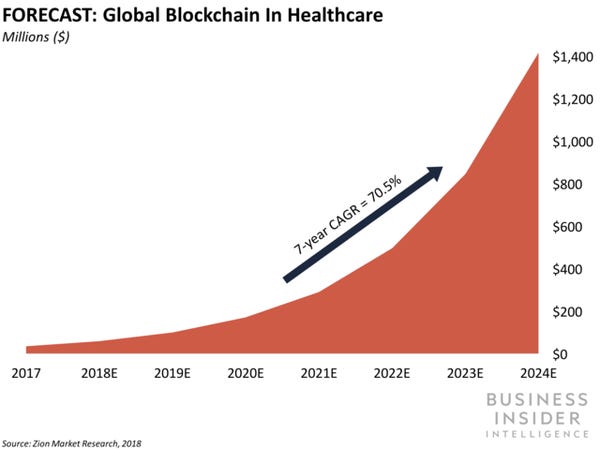 Blockchain in healthcare is projected to grow. Business Insider Intelligence

As specialized connected medical devices become more common and increasingly linked to a person’s health record, blockchain can connect those devices with that record. Devices will be able to store the data generated on a healthcare blockchain and append it to personal medical records. A key issue currently facing connected medical devices is the siloing of the data they generate — but blockchain could be the link that bridges those silos.

The average homeowner sells his or her home every five to seven years, and the average person will move nearly 12 times during their lifetime. With such frequent movement, blockchain could certainly be of use in the real estate market. It would expedite home sales by quickly verifying finances, reduce fraud thanks to its encryption, and offer transparency throughout the entire selling and purchasing process.

Media companies have already started to adopt blockchain technology to eliminate fraud, reduce costs, and even protect Intellectual Property (IP) rights of content – like music records. According to MarketWatch, the global market for blockchain in media and entertainment is estimated to reach $1.54 billion by 2024. 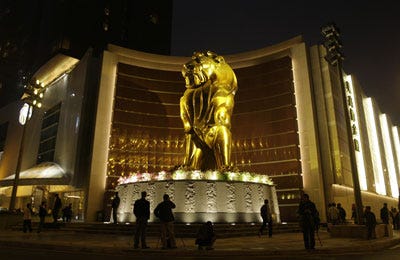 One platform that has taken the spotlight in leveraging blockchain for media, is Eluvio, Inc. Formally launched in 2019, Eluvio Content Fabric uses blockchain technology to enable content producers to manage and distribute premium video to consumers and business partners without content delivery networks.

And recently, the platform has been tapped by media giant, MGM Studios for “global streaming to web, mobile, and TV everywhere audiences of ‘certain properties.'”

Blockchain technology could be used to execute energy supply transactions, but also to further provide the basis for metering, billing, and clearing processes, according to PWC. Other potential applications include documenting ownership, asset management, origin guarantees, emission allowances, and renewable energy certificates.

National, state, and local governments are responsible for maintaining individuals’ records such as birth and death dates, marital status, or property transfers. Yet managing this data can be difficult, and to this day some of these records only exist in paper form. And sometimes, citizens have to physically go to their local government offices to make changes, which is time-consuming, unnecessary, and frustrating. Blockchain technology could simplify this recordkeeping and make the data far more secure.

Proponents of blockchain tech for identity management claim that with enough information on the blockchain, people would only need to provide the bare minimum (date of birth, for example) to prove their identities. 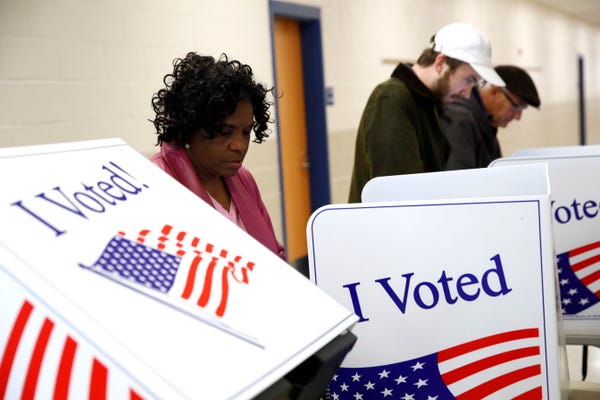 Blockchain technology has the ability to make the voting process more easily accessible while improving security. Hackers would be no match to blockchain technology, because even if someone were to access the terminal, they wouldn’t be able to affect other nodes. Each vote would be attributed to one ID, and with the ability to create a fake ID being impossible, government officials could tally votes more efficiently and effectively.

Blockchain tech could make the cumbersome process of filing taxes, which is prone to human error, much more efficient with enough information stored on the blockchain.

Blockchain could solve the anti-trust problems charities are increasingly facing through greater transparency; the technology has the ability to show donors that NPOs are in fact using their money as intended. Furthermore, blockchain tech could help those NPOs tribute those funds more efficiently, manage their resources better, and enhance their tracking capabilities.

The majority of regulatory oversight stems from recordkeeping, but the consequences of not maintaining records is inarguably much worse. Thus, compliance is non-negotiable for companies. Blockchain can make record updates available to regulators and businesses in real time, in turn reducing time lags and allowing red flags and inconsistencies to be spotted sooner.

Blockchain Applications in Other Industries 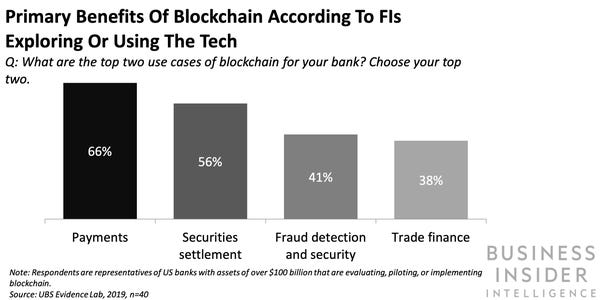 The finance industry can leverage blockchain technology for a variety of use cases. Business Insider Intelligence

If the blockchain is truly as secure as it has shown itself to be in the last several years, then such impenetrable security would be tantalizing for customers concerned with financial fraud.

As stated earlier, the encryption that is central to blockchain makes it quite useful for record management because it prevents duplicates, fraudulent entries, and the like.

The biggest advantage for blockchain in cybersecurity is that it removes the risk of a single point of failure. Blockchain tech also provides end-to-end encryption and privacy.

The immutable nature of blockchain, and the fact that every computer on the network is continually verifying the information stored on it, makes blockchain an excellent tool for storing big data.

The same principles for big data apply to data storage, as well.

Blockchain is poised to transform practices in a number of IoT sectors, including:

Despite these key areas where blockchain can be leveraged, the technology in the IoT is still dependent on startups. In fact – only 17% of respondents to Business Insider Intelligence’s survey of IoT providers think that blockchain will become a universal standard in the IoT.

Interested in learning more? Join other Insider Intelligence clients who receive thousands of Banking forecasts, briefings, charts, and research reports to their inboxes. >> Become a Client