The Latest In AI And Its Applications 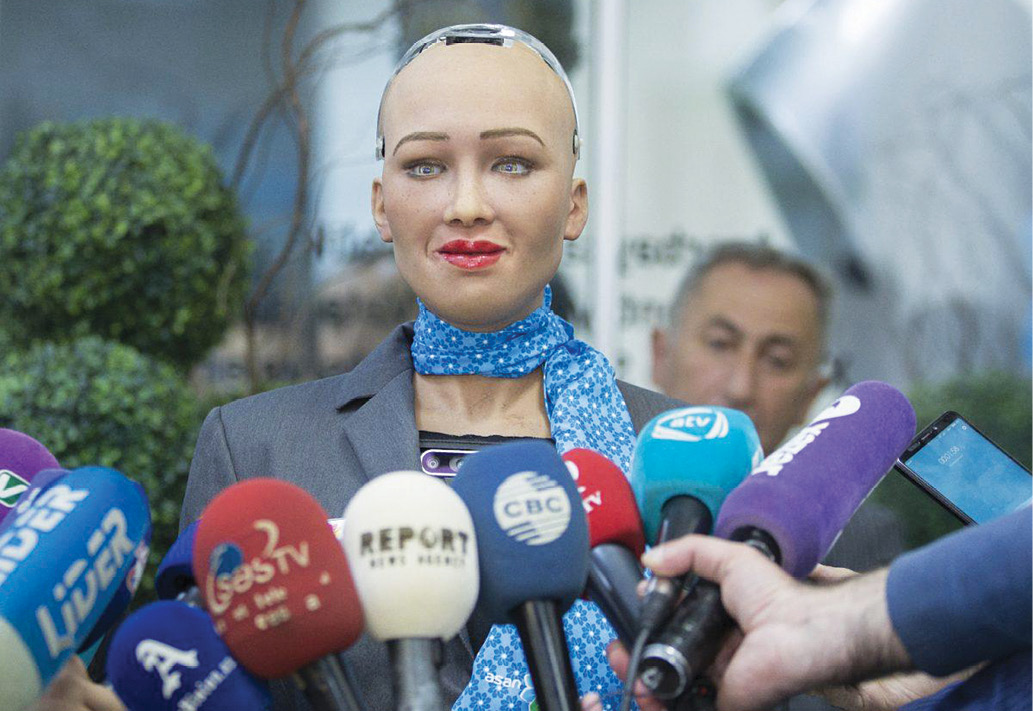 AI is becoming a disruptive force that is redefining the modern industry. This article features some exciting applications of AI, along with a glimpse into the future, illustrating how AI will continue to transform industries and our lives.

Sophia, an artificial intelligence (AI) humanoid, was in the news recently for becoming the first robot ever to have a nationality. In October 2017, Sophia was granted Saudi Arabian citizenship. This AI-powered robot is famous for speaking at the United Nations, and interviewing celebrities and world leaders.

Sophia, developed by Hanson Robotics, is an example of the most sophisticated AI-powered robots built by humans in recent times. It can imitate human gestures, facial expressions, and make conversations in the form of answering certain questions and initiating discussions on predefined topics.

AI was founded as an academic discipline in 1956. Since then, AI techniques have become an essential part of the technology industry. Different types of AI-powered robots are being developed in different parts of the world, including the US, China, Japan, Korea and India. As per reports, two-thirds of global investments in AI poured into China. This led to the AI industry grow 67 per cent last year alone.

China developed its first human-like female robot called Jia Jia in 2016, at its University of Science and Technology. Then, there is Erica, a Japanese female robot created by Hiroshi Ishiguro Laboratories, who is considered the most beautiful robot in the world.

There are many emerging applications of AI. You can find AI in robotics, healthcare, education, businesses and on your mobile devices, to name a few. We have narrowed down the list of AI applications to a few, each accompanied with a glimpse into the future, illustrating how AI will continue to transform industries and our lives.

These are basically software agents that provide a wide variety of services. Amazon Alexa, Google Assistant and Siri are some of the most popular AI assistants. Many virtual assistant software are now being installed in smartphones as well to serve you in a better way.

This field has revolutionised modern businesses. While the amount of information on potential consumers grows, AI-related technology will be of utmost importance when making data-based decisions. AI helps find people and customers based on their interests, demographics and other aspects to learn and detect the best audience for particular brands.

There are areas where content created by AI can be useful and help attract visitors to a website. AI can also write reports and news based on data and information. Hundreds of articles can be created with AI technology quickly, which can save a lot of time and resources.

With AI, websites could exist without the help of programmers and designers. Applications, such as Grid, use AI to design websites based on the information provided by users like images, text, calls-to-action, etc. AI can make websites look professional in very little time and at a much lower cost.

Consumers are already using chatbots to chat with friends and colleagues without waiting for a long time for a response. Chatbots automate responses to potential buyers’ frequently asked questions and provide them a way to search for the product or service they are looking for.

Natural learning processing and machine learning techniques are used by these bots to find the correct responses. Many brands have started using these techniques to communicate with their prospective customers through messenger applications like Facebook Messenger, WhatsApp and Slack.

The main concern in today’s digital world is cybersecurity. Malware and virus attacks are common in the cyber world. There is a constant threat of data security to not just individuals or corporates but also government sectors. AI along with machine learning is used for the protection of data. AI allows you to automate the detection of threat and combat without the involvement of humans. AI has been used for password protection and authenticity detection.

AI is used to manage huge data flows and storage in the IoT network. With high-speed Internet networks and advanced sensors integrated into microcontrollers (MCUs), AI along with the IoT is creating a new wave of disruptive technologies.

With the explosion of the IoT, there are problems regarding data storage, delay, channel limitation and congestion in networks. One solution to solve these is to use AI in data mining, managing and controlling the congestion in networks. Techniques used in AI include fuzzy logics and neural networks in conjunction with the IoT network.

Wall Street, financial district of the US, uses complex computer programs to do heavy jobs. These programs run on their own. A few years ago, stock markets plummeted, taking down a trillion dollars worth of market value, due to a malfunctioning ANI program.

Also, for example, when you deposit a cheque using your mobile banking app, it runs through a refined ANI system that can read the cheque much faster than humans. When you shop online, you are essentially feeding data into ANI systems.

AI has been used to algorithmically generate objects that can be rendered digitally. It can generate new patterns with high speed, good efficiency and verisimilitude. Algorithm-driven design tools help you construct user interfaces, content and personalise user experiences.

Publishing tools such as Readymag and Squarespace have greatly simplified the work to the extent where you can get many high-quality templates and designs without having to pay for a designer. There are many other algorithm-driven design tools for graphic design including identity, drawing and illustrations.

AI solution providers offer tools and libraries to manipulate images and photos. Soon, AI will drive the next generation of apps for visual arts and creative designs.

An AI model, called CRAFT (Composition, Retrieval and Fusion Network), is being developed by researchers from University of Illinois, USA, and Allen Institute for Artificial Intelligence, USA. It can convert provided text descriptions into video clips of an animated series. To simplify, AI matches videos with word descriptions, builds a set of parameters and generates scenes.

Defense Advanced Research Projects Agency (DARPA), USA, is working on its Artificial Intelligence Exploration (AIE) programme, which is a key component of the agency’s broader AI.

AI in space exploration is gathering momentum, too. Over the next few years, new missions would be taken up by AI as we voyage to the Moon and the planets, and explore possibilities in Space. AI is also being used in NASA’s next rover mission to planet Mars.

National Geographic Society and Microsoft are partnering to explore how AI can help us understand, engage and protect Earth.

AI is helping the oil and gas industry to preserve the ecosystem while discovering new resources.

Robotics and AI have been replacing traditional research and exploration methods in ocean science and technology.

AI is being used to improve education systems. Traditional techniques might be replaced by personalised, adaptive learning to tailor individual students’ strengths and weaknesses. Machine learning can be used to identify students and focus extra resources on weaker ones.

AI-based robo-readers are being used in essay grading in schools. The approach involves pairing human intelligence with AI to improve the overall grading system and help students accomplish more.

ANI-assisted automotive technology is being employed in driverless cars. Recently, IBM developed an IoT for automotive—a program to eliminate driver errors through connectivity. Since many accidents are caused by human errors, researchers are trying to find ways to minimise human errors using AI algorithms.

In the future, your car is likely to have well-packaged complex computer programs. An automated vehicle uses AI, sensors and global positioning system coordinates to drive itself without a human operator.

You might already know about Deep Blue, IBM’s chess-playing supercomputer, which beat international grandmaster Garry Kasparov in the late 1990s.

Chinook, a program developed at University of Alberta, Canada, can beat any human player at the game of checkers. There is also a computer program called Maven for scrabble game. These are perfect examples of AI.

More recently, AlphaZero, an ANI developed by DeepMind, won 100 games in a row against the world’s current best chess program.

Almost every modern video game has an AI component. Video game reviews are based on the quality of AI.

A new type of AI algorithm is being used by Google’s Medical Brain to make predictions about the likelihood of death among hospital patients. This technology is the latest attempt to revolutionise healthcare. AI programs are being developed and used in diagnoses, treatments, drug development, and patient monitoring and care.

Today, most doctors use ANI programs. These assist doctors in accurately diagnosing cancer and various other diseases. Then, there is a robot chemist that uses machine learning to study new molecules and reactions.

AI and robotics are enabling new military capabilities and strategies including intelligence, surveillance and even nuclear weapon systems. AI is used in autonomous weapons and sensing systems.

There is a lot of military AI research and development going on around the world to keep fast-paced advances in machine learning.

As per a report by Accenture, AI holds the potential to add US$ 957 billion or 15 per cent of India’s current gross value by 2035.

Union Budget 2018 announcements include national programmes to conduct research and development on technologies like machine learning, AI and others.

NITI Aayog, the nation’s think-tank and premier policy-making body, is working on new technologies for the development of the economy.

The government is working on AI initiatives to put India on the global map with regards to AI, and to promote it in health, education and agricultural sectors.

India-made Miko by Emotix, a companion robot, is an example of technologies that incorporate AI. Miko engages, educates and entertains children besides talking to and playing games with them. It is equipped with answers to basic questions related to general knowledge and academics.

There is a humanoid robot called Rashmi, developed recently in India. It is the first Hindi-speaking robot who is hosting a show on Red FM since December 2018.

AI is becoming a disruptive force that is redefining modern industry. Importance of AI technology is being felt across a broad spectrum of industries. From voice-powered personal assistants like Alexa to technologies such as behavioural algorithms, suggestive Internet search algorithms and autonomous vehicles, there is a lot of scope for applications of AI today. Robots built to look and act like humans are getting a lot of attention, and making splashy headlines and appearances.

As far as India is concerned, initiatives by the government and its roadmap for national AI programmes along with private players are expected to bring a revolution to the Indian industry.

AI is still in the developing stages. The market is not easily quantifiable and yet there are plenty of opportunities available for AI. There is hope that AI applications will keep serving humans in the most beneficial way going forwards.

Mobile technology: The amazing impact on our lives
The Mobile Revolution: How Mobile Technologies Drive a Trillion-Dollar Impact
Tech Stack Used for Mobile App Development in 2020